First Road Trip in the 28TBS

Earl and Pat hit the road!

On March 10, 2022 my wife and I along with Stray, our cat, left Michigan heading for San Diego CA.  We were driving our new Hoosier Custom Cruiser 28TBS, and towing our Ford Fiesta that we call  "Thin Mint"  due to its color.  I planned our trip to take 5 days, spending 4 nights on the road. I am comfortable driving 7 to 8 hours per day, so I try to plan accordingly. 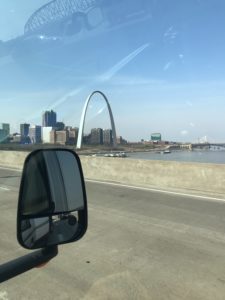 We passed the arch heading to Rolla

The first night we made it to Rolla MO. I made a reservation at Old Route 66 RV Park. I called ahead and they didn't require a down payment. They only had electric hookup and no other services were offered, due to the time of year. This was fine with us because we only needed a safe place to spend the night. The cost was only $30.

The weather was below 20 degrees when I left our home in Michigan.  I saw that the temps were going to be in low 20's or colder until our 3rd day at least, so we had the fresh water full and I poured RV antifreeze down the toilet and sink so that the holding tanks and valves would not freeze. We have heated holding tanks but I didn't want to take a chance. We ran the furnace and turned the water heater on GAS. This will keep the water heater from freezing. The fresh water system is all above the floor so as long as the furnace is on I knew that the fresh water system was safe from freezing. 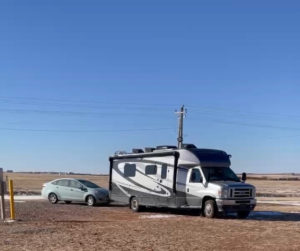 Free electric hookup in Hinton. By this time the snow, salt, and dirt have got Thin Mint and the Hoosier Cruiser needing baths!

After spending a big part of our morning stuck in a traffic jam leaving Rolla, we grabbed breakfast at Cracker Barrel, and headed toward Hinton, OK.

I found a casino that claimed to have an RV park, so I called ahead. Sugar Creek Casino told me that we could spend the night at no charge!  When we arrived, we called the service desk and they told me to come in to the players' club and someone would show us where we would spend the night. Really great service everyone was very friendly. They provided us with electric-only hookup which was more than we needed. We were Happy Campers.

We posted a short video on TikTok about our campsite here, but I was using voice-to-text, and the voice translator thought I was saying, "Kenton" 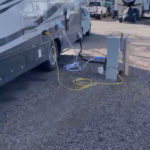 It was nice to get full hookup after a few days of dry camping.

The next day we were scheduled to stay in Albuquerque New Mexico at Journey KOA . Full hookup was $71.02. We are KOA Members and enjoy the KOA campgrounds. Its kind of like Mc Donalds -- you can always count on it being pretty consistent, usually clean,  and safe and friendly.  It was nice to finally get full hookup after a few days of dry camping.

So, the fourth night we made reservations in Phoenix AZ. We stayed at a very nice campground called Desert Shadows. With tax we paid $74.
I did find a car wash and was able to run Thin Mint through the carwash. She was in really bad need of a wash. I couldn't find a truck wash for the Hoosier Cruiser.

Finally the last day of our first leg of our journey!  From Phoenix, AZ to Chula Vista, CA. where we are going to enjoy almost a week. We are looking forward to enjoying several days in one location, and so far we are loving it!
Sun Outdoors San Diego Bay in Chula Vista, CA is one of the nicest campgrounds I've ever stayed in.

Summary, Review, and performance of the 28TBS

I can't say enough good things about the new 7.3 Liter "GODZILLA" Engine from Ford. Wow, it was a pleasure to drive!  Very smooth and strong. I can see why they call it Godzilla.IT IS A BEAST!
I have driven many types of motorhomes over the years, especially B-PLUS motorhomes in the last several years, and while the V-10 was a great engine, it lacked in power. The transmission would down shift if it even saw a hill, and the engine would scream.
This new engine stays in 6th gear very well, and only drops into 5th gear on steeper hills. The only time that it went into 4th gear was on 3%-6% grades. I never had to go below 4th gear! I drove it at elevations as high as 7000 ft, and I was always able to maintain the speed limit. When we reached 5,000 ft I could tell that it was not as strong as it was at lower elevations, but I was going as fast at the road conditions would allow, so I was driving as fast as I wanted to.
Most of the trip we were bucking a head wind and also from our left "south west wind". The sumo springs along with the design of our coach made it easy to drive. I was passing other RV's, and was very stable. I always felt like I was in control, very stable. The only thing that I was worried about was "what is this wind and mountain terrain going to do to my MPG??". Several potential customers were asking me what I was getting for mileage. I wanted to wait until we arrived at Chula Vista before trying to calculate mileage. I'll be honest, I was afraid to look. I was driving 70 MPH or more, and bucking that headwind, and up to 7,000 ft elevation. I was nervous.
Gas mileage: I was hoping for 8 MPG.  Well, we drove 2260 miles, and used exactly 220 gallons of gas. That's 10.27 MPG!!! And don't forget, we were towing Thin Mint, a Ford Fiesta!! Amazing!
All in all, this coach performed above and beyond what I even dared to hope. Every minute spent in it it's obvious that there was thought, detail, and pride put into every aspect of it. There are a lot of new features, but they weren't developed in a board room or an office by people who don't camp. They aren't new concepts. These are ideas that have been rolling around in our heads for the decades we've been in the industry, thinking to ourselves that "if I could do this my way, I would do it like this." And it's built by people with an intimate knowledge of building motor homes. None of us has fewer than five years experience building, and many of us have over a decade.
I'll be heading to the FMCA rally in Tuscon after a few days here in Chula Vista. I hope you'll stop by and see us, or send us a message!

We passed the arch heading to Rolla

First night was cold, and saw a little snow!

Traffic jam on our way to breakfast leaving Rolla

No matter how many times we cross the US, we never get accustomed to the beautiful scenery

Glad to have a few days to relax in Chula Vista

View from the upper deck! Living the life!
Posted in Earl on the Road